It’s been a challenging two years. Public health guidelines intended to keep people safe from a deadly disease meant community centers, like the Burien Community Center, had to close their doors to the public.

It’s been a challenging two years. Public health guidelines intended to keep people safe from a deadly disease meant community centers, like the Burien Community Center, had to close their doors to the public. At a time when people needed social connection, public spaces were no longer a safe place for people to gather.

But even though they had to close their doors, City staff didn’t stop serving the community. Customer service staff started a phone call program to check in with the older adults who had participated in their programs, they started a popular “Rec in a Box” service where they delivered a box of arts and crafts or sports equipment for youth to use at home, and they partnered with Boys and Girls Club in 2021 to offer summer camp programs.

In preparation for fully opening the community center again to the public, the City re-started recreation and fitness programs in February. Drop-in programs started back up in March and facility rentals opened up after the restroom construction project was completed in mid-April.

The community center rooms are popular spaces to be rented for private use. Weddings, quinceañeras, community meetings, and memorials are all examples of ways the community can use the Burien Community Center.

“The pandemic gave us the opportunity to think about new partnerships and how we can offer the space for them to deliver their programs and resources,” said Casey Stanley, the city’s recreation manager.

An ever-adapting building designed for community

Built in 1970 as the Burien Public Library, the community center has been in need of upgrades for some time. The bathrooms went through a recent renovation and now include an all-gender facility. They are also working to upgrade the 50-year-old heating and cooling system. Staff are planning for structural upgrades to meet seismic standards, a backup generator to support life safety requirements, and lighting improvements.

The building is an architectural gem. Designed by Durham, Anderson, and Freed, at the time the 20,000-square-foot building opened it was the second-biggest library in the King County Library System. Floor-to-ceiling windows frame a view of the wooded, three-acre lot. Brick bas relief sculptures created by artist Harold Balazs adorn the exterior walls of the building. The building won an award from the Seattle chapter of the American Institute of Architects in 1971.

Under the leadership of a new director, the Burien Community Center can now operate as an emergency shelter. While plans had been in place to improve the heating and cooling system and ensuring that an alternate power source was available, the extreme heat events of last summer made the need to open a shelter more urgent. In response, City staff pulled together quickly to open the Burien Community Center as a daytime cooling center. They also opened as a daytime warming center when the temperature dropped below freezing this past winter.

“The City is planning to make the Burien Community Center more reliable as an emergency shelter,” said Carolyn Hope, PaRCS director and interim city manager. “There is a need to protect our community members from extreme heat, cold, and poor air quality including people experiencing homelessness, those who may lose power, and people that don’t have air conditioning or adequate ventilation in their homes. We want to support our community when they need it the most.” 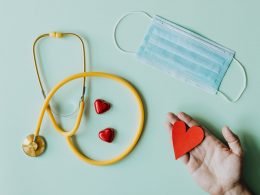 Unexpected Beauty and Heartbreak during a Pandemic

February was supposed to be the start of my new life. I quit a stressful, well-paying job and began a sabbatical, thinking that a pause from work would restore my health and sanity.
byGabriela Denise Frank 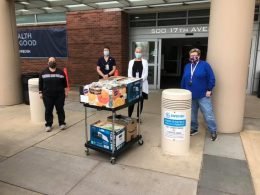 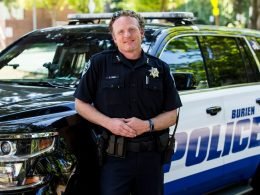 See Something, Say Something: Message from Chief Boe

In late December, a community member was walking past an apartment parking garage in the middle of the…
byTheodore Boe 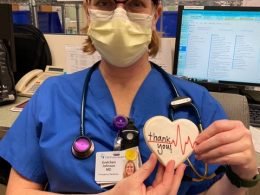 The workers at St. Anne’s Hospital (formerly Highline Medical Center) have been on the front line of fighting…
byStaff at St. Anne's Hospital
Total
1
Share